Originally posted on 7-20-12. I think this survey was the first time I ever screen clipped a twitter convo. Bit of trivia for those of you who know twitter caps rule my life now.

(Who names these things???)

Favorite crayon color?
We made the coolest projects with wax paper and an iron when I was a kid, shave the crayons down and melt it into something artsy, like a take-off on stained glass. Well, that fond memory was quickly replaced with memories of the icky smell of hot wax paper and getting my fingers singed, and then the whole thing not looking cool at all. Um, this is freaking awesome already…

Should waffles be the National Food of America?
Didn’t Belgium already nab those as a national food? I thought our national food was Taco Bell, or Sonic, or something like that. Chili cheese coneys would be a freaking awesome national food.

What are your thoughts about mac and cheese?
I have wondered for a long time why they don’t sell little packets of that dried cheese as snack packets, because who doesn’t like to stick their finger in there and lick it off? That would be freaking ok ok that’s old already, I know.

Who is your favorite Sesame Street character?
Gonzo is cool because he loves chickens, but I’m more a Rob and Nicky fan now. I swear, I did not mean the double entendre on this sentence. Click on Gonzo and Lolita to see how he became enamored of Camilla… 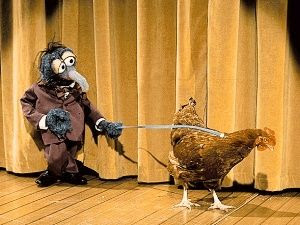 Ever talked to yourself?
I talk to stuff around the house once in awhile, yeah. I’m not talking to *myself*. I think a number of people would feel relieved to know that I’m more apt to talk to appliances and inanimate objects in my old age than I am to talk the ears off the younger people, to their great suffering. And since I’ve lived through this myself during the zombie apocalypse, that’s saying a great deal.

How many points do you have right at the moment?
I used to keep sticker charts, but after getting days and/or weeks mixed up and finding little stickers in my hair, I toned it down a bit. But the star chart for the timed multiplication tests in third grade was freaking awesome, and yes, that really belongs here this time, even though I could never beat Jaynette Foutz and I would have rather had blue stars than silver. That’s right, I was jealous of the person who was just barely slower than me.

What mood are you in right now?
I’m good, I just had a hot chocolate with a scoop of protein powder, with prebiotics in them. Those are all the rage now in chicken farming, btw. Prebiotics in Companion and Livestock Animal Nutrition

Is your cell phone dead?
(I skipped a bunch of questions and wrote this one around two weeks ago.) I think my brain is dead. My father-in-law is visiting and has spent the last 3 days talking nonstop. He’s over 80. Hours and hours and hours of talking, days and days of talking. I thought old people were supposed to go down for naps.

Can peas really talk?
I think the freaking awesome in this survey is taking a long, steep slide down a freaking bored teenage brain.

When was the last time you applied deoderant?
…who doesn’t know how to spell deodorant. And probably obsesses about his or her armpits. Or everyone’s armpits. My youngest is so obsessed with her armpits that she’ll rub anything in them to change the imaginary odor she smells, even if all she can find is rubbing alcohol or lotion.

Ever eaten soap?
Have you ever gotten shampoo in your eyes and noticed suddenly you can taste it? Kinda like when you get a little saline in an IV line and you can suddenly smell it the second it goes in.

There is no thirteen question, feel free to say what you would like.
Wo, we’re counting??? I had to go back and count. I’ve done so many surveys where actual numbers got completely missed, I found it hard to believe this unnumbered question would be correctly labeled at ‘thirteen’. So while I’m feeling free to say what I like, I bet you are wondering who my favorite floor reporter was at Comic-Con this year, so I’ll tell you it was Matt Mira. I know, I know, after watching 7 hours of live Comic Con between Spike and G4 and catching hours and hours via twitter feeds on the side, you’d *think* I’d have a whole slew of other guys to schmooze over, like, oh, I dunno, JOHN BARROWMAN, but seriously, I think Matt is a cutie. I follow him on Twitter, he’s the bomb. No, wait, I said that wrong. Matt Mira is *freaking* *awesome*.

Click on Matt to see some of what he does. I followed the Atlantis thing live, and I got all tingly. Mighta been Matt being cute in the rain, mighta been that it was the last ever shuttle launch, but I’ll always have that day. 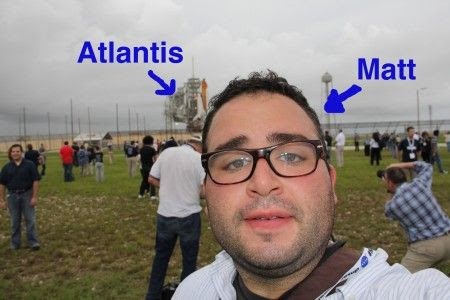 And THIS is why I love twitter. Answers in real time from real people who really know!!!  I checked my twitter feed about a half hour after I posted this survey, and wham, live info for you.  If you read this before Attack of the Show comes on Monday evening…

What are your thoughts on Spongebob Squarepants?
He completes me. You know how people can be Jekyll and Hyde-ish? Imagine Mr. Spock and Spongebob in the same head. If I’m ever locked away in solitary confinement, I’ll walk out with the same amount of sanity I walked in with. Don’t try to figure that out, it’s like a mobius strip, you really don’t get anywhere.