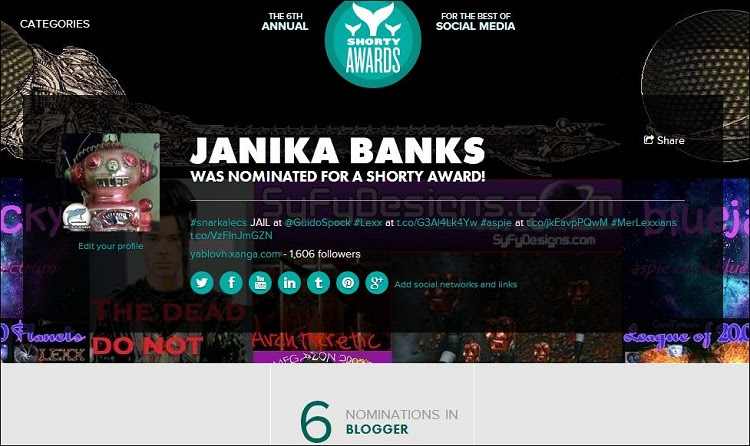 I know this might be a joke to a few people, but I was nominated for a Shorty Award this year in the blogger category, sweeeeeet. I’m new to all this and still rounding up all my stuff, nowhere close to being named a finalist, so I think it would only be fair to copy my most famous survey EVER over to my survey blog to do it even more justice.

THE SHORTY INTERVIEW WITH JANIKA BANKS

The challenge of squeezing big thots into teeny tiny boxes is exhilarating.

What’s the most memorable Snapchat you’ve ever received?

I could say it’s none of ur biz & I’m not telling, which would still be true enough. I haz no snapchat.

Jon Hendren @fart is my secret twitter fetish at 3 a.m. when I can’t sleep, I lay there stifling giggles. 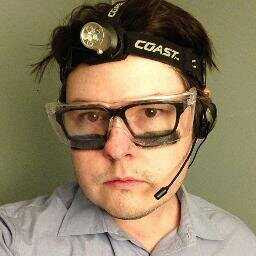 What was the funniest trend you’ve seen?


How has social media improved your life?

I’m not alone anymore. All y’alls are in my head with me now. 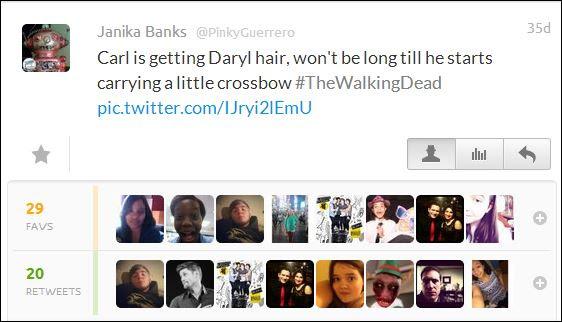 Who do you admire most for his or her use of Twitter?

@StayPuft That is one crazy marshmallow.

I saw something the other day about twitter & facebook getting married & having kids. I say bon chance! I’m not a side taker.

Sometimes I hear tweets in Stephen Hawking mode. I think that would be cool.


As a parent, coach, or role model tell us: How do you use social media to help others focus on all that is good in their lives? Don’t forget to submit a nomination for the #KeepGoodGoing award!

FOCUS! WORK!!! >=l Like that. I’m really good at getting to the point.


What are six things you could never do without?


Why should we vote for you?

Bcuz this is hilarious, & if you do I might give you one of my very special ultra rare #FF poems. 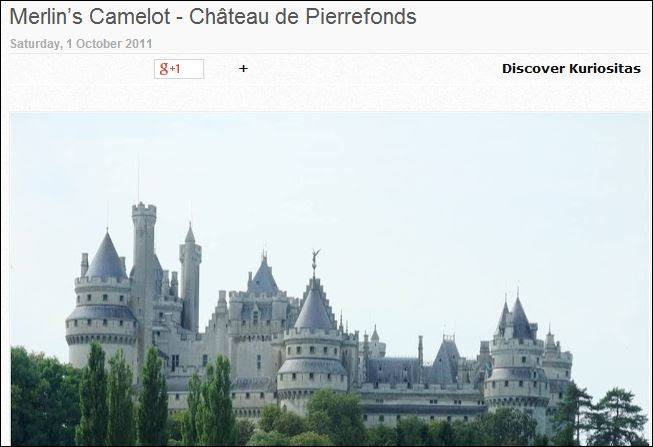 Who do you wish had a Twitter feed but doesn’t?

Everyone who tries to DM, PM, & text me individually wanting info or pix. I made my life public for a reason.

Really hate to jinx myself & say #BradleyJames bcuz it would def happen if he croaked ironically during filming or something. 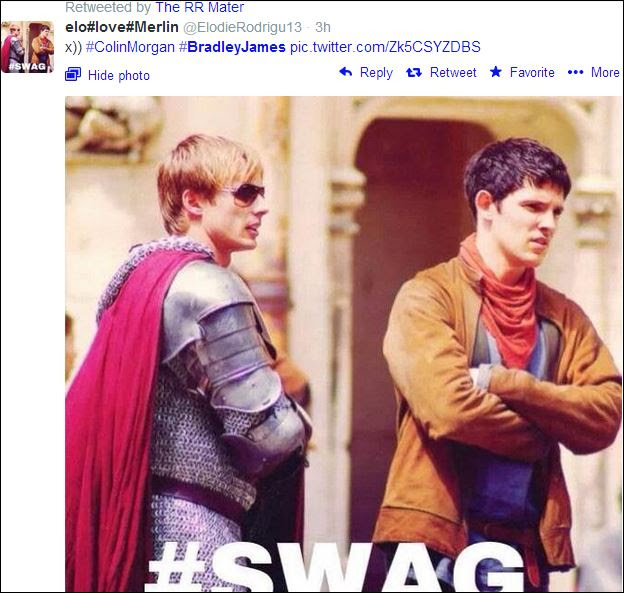 Not posting pix of something ppl go out of their way to say is amazing. Phone is in ur hand, ur RIGHT THERE, tweet a pic, how hard is that? (I’d like to amend this with STOP TWEETING SPIDER PIX!!!)


What question are we not asking here that we should?

The obvious- would we like brain chips in our pets so they can tweet & we can see what they’re thinking? YES. 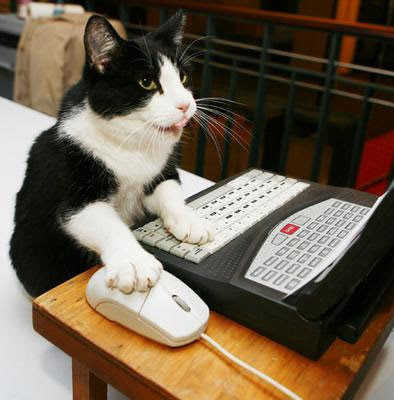 What’s the wildest experience you’ve had via social media?

Can’t tell ya, it’s going into the book. For reals.


How will the world change in the next year?

How much time you spend online?

If I dream about tweeting & blogging is it real? What if this whole thing is a dream? What if I wake up & the Shorty Awards don’t exist?


Is there someone you want to follow you who doesn’t already? If so, who?

If Wil Wheaton followed me I’d be set for life. (Click this pic to follow his wife on twitter. I love her hair here, so I pinned it, in case you wanna repin that.) 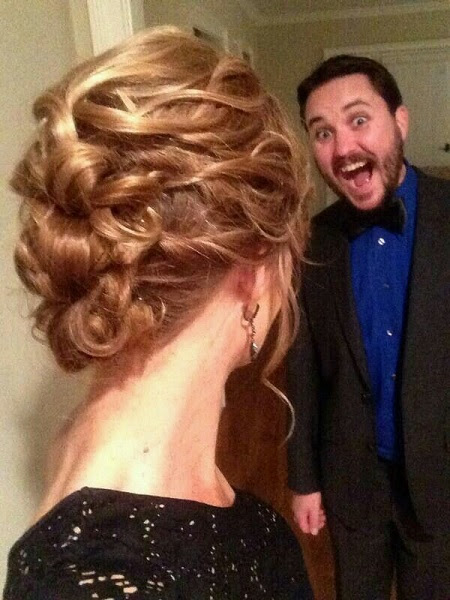 Time travel. It would be easier to go back to last May than find a mobile tweet in my history that isn’t documented properly in my archive.


What’s the most interesting connection you’ve made through Twitter?

I tweeted a pic of the Tenth Doctor reading a book & tweeted that it was From Eternity to Here by @seanmcarroll & he RTd me #favephysicist (I just originated that hashtag on twitter, woot!) 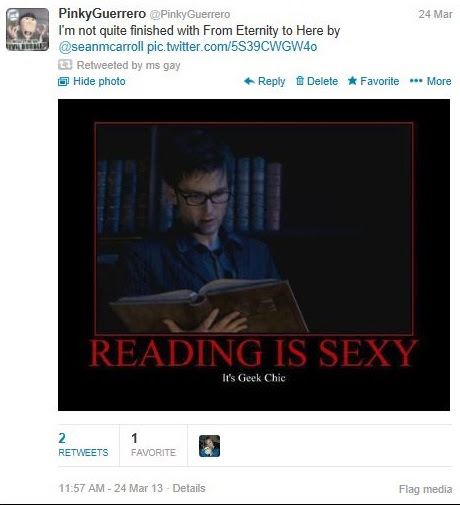 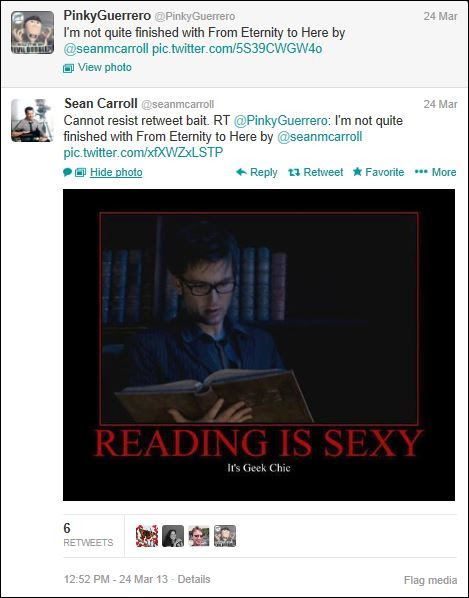 Seamless with no interface probs & something so entrenched in our lives that we can’t live without it continually. Too bad I’ll be dead. (I’ve actually made preditions about future internet here and here and several other places that I’m not going to dig up right now.) 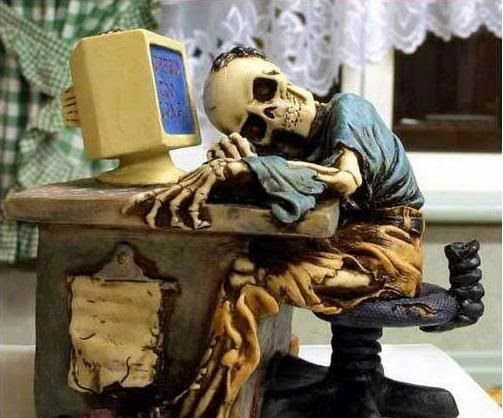 In what ways do you waste the most time on social media?

I was once told to stop wasting time filling out silly surveys & posting them. LOOK AT ME NOW, NYAH, NYAH >=D


Hashtag you created that you wish everyone used?

#MerLexxian originally for Merlin & Lexx fans but now it’s more about Pinky being a weirdo. (This is now a registered mashtag because I’m a crazy weirdo with a twisted sense of mangled ego. If you click that you go to an awesome twubs page that you can join.)

I think the bigger challenge is what NOT to tweet.

I’m up to 8 hours between tweets now. Before Christmas, Vizify had me gauged at round the clock tweeting 24/7 bcuz sleep disorder. (I just hacked this code, we’ll see how long it works.)

via Vizify
(That Tony Solo guy keeps popping up in my twitter apps. No idea what’s up with that. *cough* snarkalecradio *cough*)

How do you make your tweets unique?

I elevate the mundane to speshul party status.

What is the weirdest or most inappropriate place you’ve ever made a social media post from?

I accidentally walked into the men’s restroom in Walmart while I was tweeting & @mattyboy5150 laughed at me. (Click this pic to check out his IMDB page.)

I wish my dad was on facebook so he could see it’s not a magical place that we all automatically get with our computers.


What do you wish people would do more of on Twitter?


What are some words or phrases you refuse to shorten for brevity?

I refuse to shorten Doctor Who for the sake of brevity. Everything else gets slaughtered.


Ever get called out for tweeting too much?

Everyone I know is grateful I tweet bcuz I stopped writing 10,000 word emails.


What is one of the biggest misconceptions of Twitter?

Ppl think I’m addicted to my phone, it’s more like I feel like I’m part of the Borg now, all those voices go thru my eyeballs into my head. 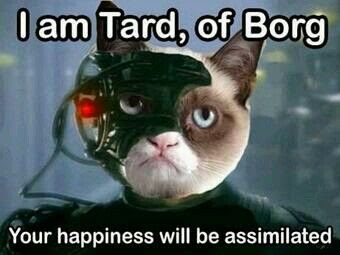 People should follow me bcuz I read every single bio & learn where they are from, & list them into appropriate groups for more interaction. (I am very serious about this, and I periodically post images from TweepsMap because I love maps and graphs. This is from today.) 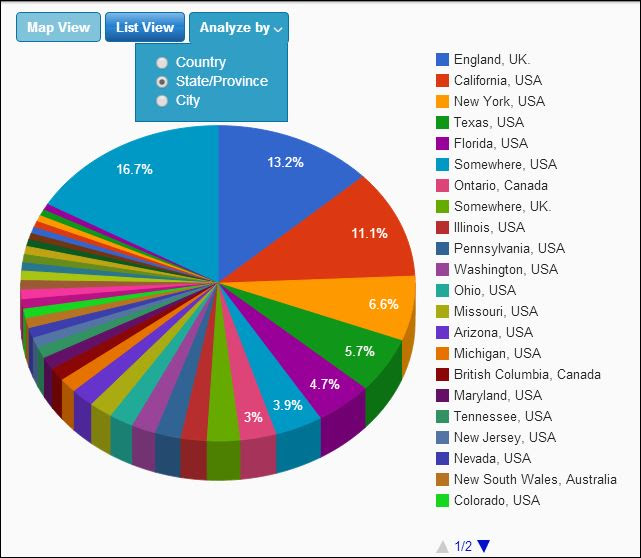 What will the world be like 10 years from now?


How do you use Twitter in your professional life?

Twitter’s made my life BETTER, depression is easier to deal with, get real time news faster, laugh more, watch TV w/ ppl around the world.

GIF bcuz it pops right up in the feed without having to click and load.


What’s the funniest celebrity tweet you saw in this past year?

Funniest celeb tweet- @Gary_R_Graham mocking @AdamBaldwin & he replied w/ My Little Pony pic with his head on it saying I set fires to feel joy. (Ok, so maybe it was 2012 instead of 2013, but really close.) 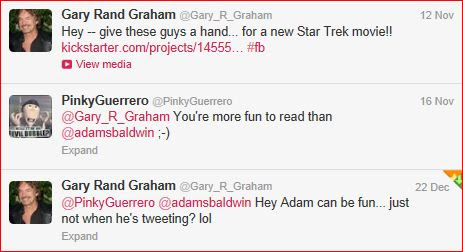 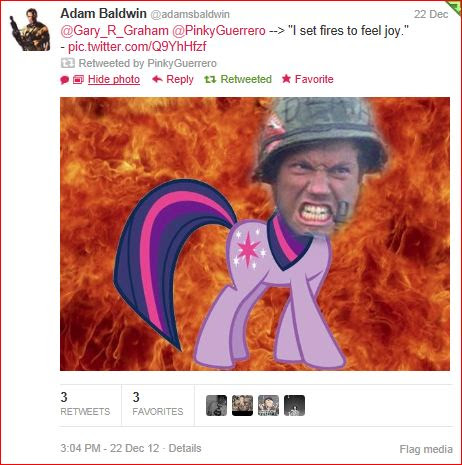 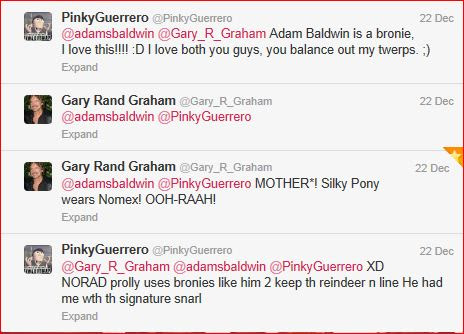 140 characters of advice for a new user?

Noobs can do whatever they want as long as they don’t bomb my DMs. That goes for wizened biz ppls as well, don’t be a nidiot with DMs.


How do you pronounce GIF?

The first time I saw “GIF” I thought it was an acronym for a mathematical function.


Have you ever unfollowed someone? Who and why?