1. What is one emotion you are feeling right now?
Crap, I have to come up with an emotion first thing.

2. What time did you wake up this morning?
2ish, although it’s debatable if I really slept at all.  I started strength, I mean, wimp training yesterday, low impact core training for the spine, now my nerves are ringing up and down my body.

3. How many hours of sleep did you get?
*checking watch*  How long do I have to do this?

4. What are you currently doing?
Oh, good lord.  Let’s divert ourselves to a cute but true story.  Many years ago, in the late 40′s and early 50′s, when recipe books were first coming into vogue and the ‘modern housewife’ was beginning to be taken seriously as both a consumer and a vital cog in the American wheel, recipes started taking on cute little names like “Goldenrod” (creamed boiled eggs over toast) and “Sunshine Carrots” (cheesy carrot buttons with bread crumbs).  Yes, I know I have too much time on my hands, but food history is one of my obsessions, so get over it.  Anyway, my Uncle Tom was walking through the kitchen one day while my grandmother was cooking dinner, and asked, “What’s ~THAT~?”  My grandmother told him it was called Sunshine Happiness.  He retorted, “Happiness?!  That looks like Sadness to me!”  And in our family it has been called Sadness ever since. 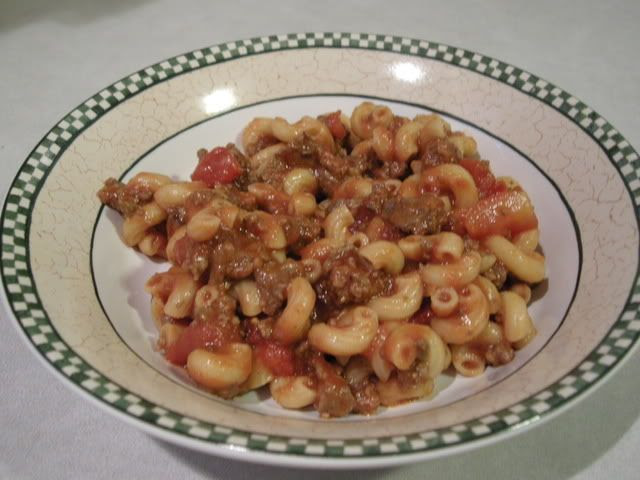 I never knew it was called ‘goulash’ until I was nearly grown up.


5. Have you kissed someone within the past week?
I don’t kiss my chickens.  I heed all salmonella warnings.

6. Have you told anybody you loved them today?
Ha, lemme just dial someone up at 3 a.m., hang on a sec.

7. Have you ever been IN love?
According to this definition, constantly.
“4. An intense emotional attachment, as for a pet or treasured object.”
Except I’m not one of those people who coos over anything or can’t part with anything.  I’m afraid it’s all in the moment.  I’m flighty.  One day I’m in love with shrimp scampi, another day I’m in love with a 3rd Rock from the Sun marathon.  I think the feeling of euphoria is to blame.  I know it’s temporary, but I can’t help it.

9. Do you miss anybody?
I sorta miss the Hamburglar.

10. Do you have plans for tomorrow?
Food will figure prominently, but I’m not yet sure in what form.

11. What is the last thing you ate?
Thank goodness for the new pause capability in the dvr experience, eh?  They flashed a grilled cheese at me right in the middle of 24, and I *had* to have one.  Scott and I reminisce about having only 3 channels and how they went off by midnight back in the day.  Who’d a dreamed you’d be able to pause a broadcast on command to go make a sandwich?  I’m tellin’ ya, we are living in the golden age, and we’d better appreciate it NOW because the world market sounds like it’s crashing, big time.  And once those solar flares rip through our satellites, back to good ol’ radio.  Yep, better use those pause controls while you still have the chance.

12. Is there a member of the opposite sex in your life who means the world to you?
I asked Scott that, and he said, “No.”  He says it’s too early to think like a teenager.  He just got up for work.

13. What are you listening to right now?
Scott just got shocked on the refrigerator.  I heard the *snap*.

14. Are you a generally clean or messy person?
If I find a moldy dish I get all lectury.  You’d think 15 years of cranking would put a little more fear into Scott bringing home old lunch containers.

15. Have you kissed more than 3 people on your top 8?
Ok, that *snap* just happened on my lip.  Dang, it’s dry in here.  I think Scott did that on purpose.  He’s off to work now.  Funny how that perfectly synchronized with this question.

16. Have you ever liked anyone on your top 8? See above.
I’m trying to ignore that this is one of those idiotic teenagery myspace surveys, so quit rubbing it in my face.  Besides, I killed off everyone but my top 4.
17. Would you currently start a relationship with anyone on your top?
Is ‘killing off’ the same as ‘starting a relationship’?

18. Have you ever wanted to?
I think blocking and deleting are fun.  It gives a person a feeling of power.  >=)

19. Do you find members of the opposite sex confusing?
I *adore* Rush Limbaugh.

20. What was the reason behind the last time you cried?
I shed a brief tear during Boston’s “More Than A Feeling” that somehow magically comes on every Feb. 24th during the 20 minutes that I have the radio on while I drive.  “And dream of a girl I used to know.  I closed my eyes and she slipped away.”  Five years this year.
21. Is there anybody you wish you could be with right now?
I’d love to see this teenager who sees this as an emotionally angsty ‘innocent’ question come back to it about 30 years later.

22. Are you going to be alone tonight?
Scott and I have a lot of tv to catch up on tonight since 24 took up two hours last night.

23. When is the last time you saw a movie in theaters?
Geez, people, let this question go!

24. What kind of underwear do you wear?
Jockey  When I was the Bra Nazi in the big retail store for a few years, I discovered those and have never parted ways since.  The best for your buck.  And your butt.

25. Have you smoked anything in the last week?
I totally smoked a ladybug that nearly flew into my eye.  Scott thinks I’m evil.

26. Is there something you wish you could tell someone but can’t?
You’re all idiots.

27. What’re you doing tonight?
In detail, after a nice dinner professionally cooked by moi, we will be watching the season premier of Reaper and last night’s recordings of Chuck and The Big Bang Theory.  When you reach your late 40′s, 9 p.m. becomes the new midnight.

28. What is one thing you can’t wait for?
Hopefully, I make up for all this with a nap this morning.

29. How has the week been?
MUCH better, thank you.

30. Do you have a best friend?
I’ve been told so by several people.  I’ve stopped falling for that.

31. When is the last time you saw number 8 on your top?
I heard ‘Tom’ shows up at conventions now.  Always wondered if he was a real guy.
Posted by Janika at 11:11 AM